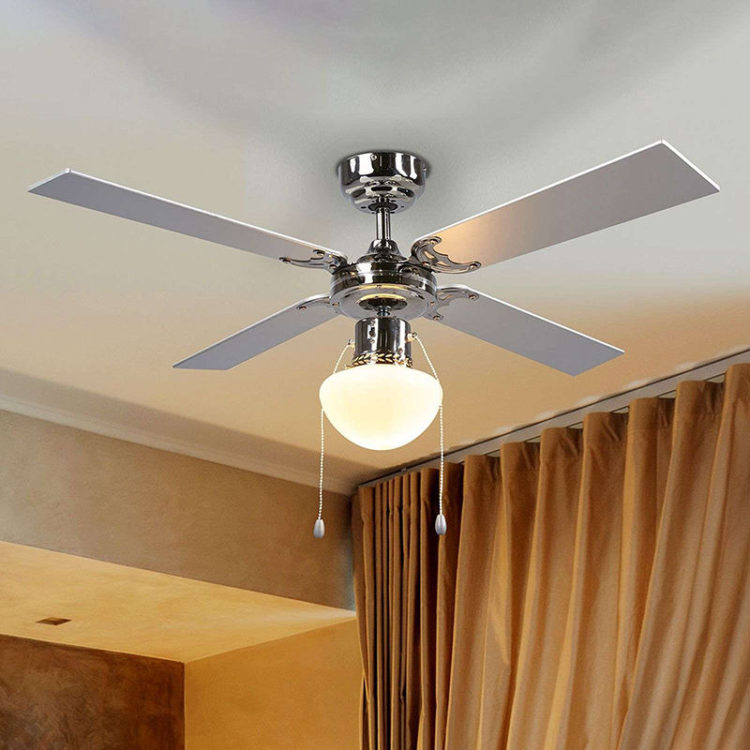 What we would consider being modern ceiling fans came much later, around 1860, and the first ceiling fan that used electricity was given to us shortly thereafter by Philip Deihl in 1882. When the competition got fierce, he added the brilliant idea of adding lighting features, which we still do in modern times.

Let’s face it, we can’t control the weather! The desire to control uncomfortable climates is an issue that humans have faced since the beginning of mankind. In fact, what can be called the very first ceiling fan was a Punkah-type, which dates back to 500 BC.

We’ve come a long way since then, and nowadays there are plenty of modern ceiling fan options for you to choose from. The real question we pose is whether or not your current ceiling fan is properly suited for your family’s home and lifestyle. This article is intended to give you insight on that and much more.

Is It Time to Upgrade Your Ceiling Fan?

Whether or not a fan should be replaced is mostly up to the discretion of its owner, but be warned that not doing so can cause the fan to eventually become unsafe. Injuries from old ceiling fans are not unheard of, and if you are in doubt about yours, it is usually best to take action in order to avoid someone being hurt. In addition to that, your ceiling itself can end up damaged if a fan is not installed properly or has become unbalanced for some reason. Old wiring can cause a fire to take down the whole house itself.

Just like an old car that still runs, just because it can move does not mean it should. It is recommended by experts that a ceiling fan should be replaced roughly every 10 years or so.

There are many signs of wear that can indicate your ceiling fan is ready to be upgraded apart from what has already been mentioned. New noises, such as a buzzing, knocking, squeaking or clicking can indicate a motor of poor quality or perhaps old age.

If a fan has not been hung properly or the blades are unbalanced, it can start to shake with each turn, which is also a sign that change is in order. If you notice that your fan has become less effective and the speed has slowed down, it might be time for a trip to the home improvement store to look at new modern ceiling fans.

Moreover, if you have already had an issue with your fan fixed, and it is happening again, a replacement may be in order.

Every year, we can find a new rollout of modern ceiling fans with various shapes and sizes. but choosing the right one can sometimes be easier said than done. To start, consider the cost, style, and functions, among other things.

The cost of a fan can vary greatly, but keep in mind that a bigger price does not always equal a better product. Keep in mind not only the price of the unit itself but also the cost of electricity and maintenance for it, which light and other features may increase.

Some people use their fans all day, every day, and others only now and then. Clearly, if you use your fan more often, the yearly electricity cost can add up to be slightly higher.

It may also need more maintenance than if you didn’t. These can be influences to consider when it comes to deciding what a person is willing to pay for their unit, and if certain features are a priority to them or not.

Different homes have different needs when it comes to fans. Depending on the climate in your area, as well as the capabilities of the current heating and air conditioning throughout the home, you may need a fan that is more powerful or perhaps can settle for less.

Beyond just the ability to cool things off, modern ceiling fans often have other useful functions. For example, many have lighting fixtures or are remotely controlled.

Nowadays, some fans can be controlled from an app on your phone, sometimes even when you are not at home! Where the fan will be installed matters too. A fan that is to be installed on a patio ceiling may have a misting feature or a different type of lighting.

Examine the needs of your family and think about what you will need from the particular fan you are seeking.

Aesthetics may be important for some people more than others, but nobody wants to be out of style. The color, shape, blade badges, and other decorative features can greatly change the overall look of the fan, and therefore the room.

If you tend to switch out your home décor fairly often, you may be better off choosing a fan with a more simple, classic look to it. With that being said, upgrading your ceiling fan to be more modern is a fairly easy and cost-effective way to get the most out of a room’s makeover.

Furthermore, you don’t always have to replace the entire unit if it is still working great.

Many people do not realize that the rotating blades can be switched out on a perfectly running electrical motor. Light fixtures and bulbs can easily be replaced as well. Options such as this can sometimes give you more bang for your buck when creating your own customized modern ceiling fans.

Once you have selected the fan for your household, it is time to call in help for it to be properly installed. The cost varies greatly but is often around the $250 mark. Some home improvement stores offer this service, but you can also contact a specialist to do the work. Once that is handled you are ready to sit back and enjoy the cool air coming from your spiffy new modern ceiling fan!

You may be also like to check these articles-

The Fluorescent Light fixtures
THE ABCs OF WIRELESS INTERCOM SYSTEM