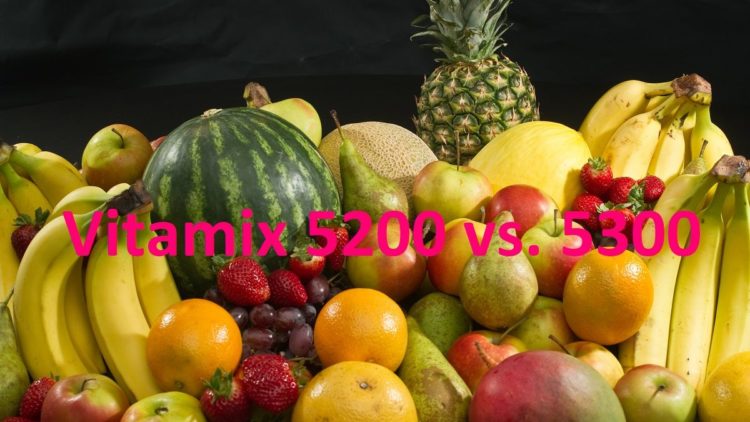 Nowadays, a blender is an essential item that you will find in many households. There are numerous options that you can choose from when purchasing a blender. In most cases, the price aspect plays a significant role when it comes to deciding your options. Some models come loaded with a lot of features while others are simply basic, but there’s a blender out there on the market for every need. Let’s see “vitamix 5200 vs 5300” Which Blender Is Best?

Vitamix is a popular brand across the globe when it comes to quality blenders. All the blenders manufactured by Vitamix are made of high quality and also look quite similar, especially Vitamix 5300 and Vitamix 5200. Although these blenders look similar from the outside, they are not the same when it comes to their performance. In this post, we are going to compare the two blenders by Vitamix so that you can make a better and informed decision when shopping for a blender.

While both Vitamix 5200 and 5300 blenders are in the Vitamix’s family of C-Series blenders, the motors of the two models are not the same. The Vitamix 5200 uses the C-Series generation motor while the 5300 model uses the Professional Series 750 motor.

The Vitamix 5200 blender is incredibly powerful, and it comes with a 2-peak horsepower which spins pretty fast, crushing all your ingredients to make soups and smoothies in a few seconds. But, the newer Vitamix 5300 model also generates lots of power. It comes with a 2.2-peak horsepower motor that gives the blender even more torque, making it more efficient.

When it comes to the blending performance, the two blenders give almost similar results, but the 5300 model creates more consistent soups and smoothies. The reason for this incredible boost in performance can be the additional 0.2 horsepower, the diameter of the blades, and the wider base.

The two Vitamix blenders have laser-cut stainless steel blades which are incredibly hardened. The blades are usually dull to the touch, but tough enough to consistently cut through all your ingredients with the assistance of the powerful motors. However, there is a difference: the blades of Vitamix 5200 are three inches in diameter while those of the 5300 models are 4-inches. Therefore, the 5300 blender has a bigger cutting area, which leads to a greater level of efficiency.

The two Vitamix blenders have similar interfaces, but there are some notable differences as well. Both models feature a similar on/off button switch and a 10-level speed knob. They are incredibly easy to use and understand. With the ten variations of speed, you can easily control the blender’s speed and use it according to your current needs. The placement of all the control panels is usually different in the two blenders. The main drawback of the 5200 model is that it does not have a pulse function.

These Vitamix blenders have some containers which are not compatible with each other. The main difference between the two models is visible with the 5200 blenders having a pretty classic container. Alternatively, the Vitamix 5300 model has an incredibly low-profile design. The Vitamix 5200 blender features a small base, which means that it holds some small sets of ingredients. The 5300 model, on the other hand, comes with a wide base that holds bigger batches; making it a perfect selection for multiple servings and larger families.

The design and the size of the containers of these blenders also affect the storage area. The low-profile 5300 model fits under many kitchen cabinets. But the 5200 blenders might fail to fit under your kitchen cabinet. The Vitamix 5300 blender is 17.5 inches tall while the Vitamix 5200 blender is 20 inches tall. The only similarity between the two models is the inclusion of a tamper. Which makes it pretty easy to add and evenly crush ingredients.

Both blenders have similar kind of casing for the motor. That means that they have a similar level of dampening noise. However, the Vitamix 5300 model is slightly louder than the Vitamix 5200 blender because of the additional power in the motor.

Both blenders are easy to clean by manually scrubbing them using a cleaning sponge. However, Vitamix 5300 blender is easier to clean than the 5200 model because the 5300 blender has a broader base. Which makes it pretty easy for your hands to reach the bottom section of the blender.

Again, the two blenders can also self-clean as well. To self-clean them, you should add some warm water into your machine then add a drop of a cleaning agent. You will have to run your blender at low speed slowly increasing the speed until your container is clean. However, you should avoid getting used to self-cleaning since the minerals have a tendency of accumulating, Which can leave the container pretty cloudy and displeasing.

Both blenders have their own set of benefits and drawbacks. If you are keen on reliability and safety, the Vitamix 5200 model seems like a better selection. Because it has a thermal-protection system as well, which the Vitamix 5300 blender does not have. And to know more about the blender, go here

However, the Vitamix 5300 model has an incredible pulse feature. Meaning that you can easily adjust its speed according to the kind of ingredients you would like to blend. That is a good feature to have, especially if you are planning to experiment and also try new drinks once in a while.

If you want a product that can do the basic blending and also make smoothies, then the 5200 blender is the best choice. But, if you need that additional power and would like to prepare different types of drinks using different levels of speed, then the Vitamix 5300 blender is the way to go.

We have another brand blender NUTRIBULLET vs. NINJA guide.